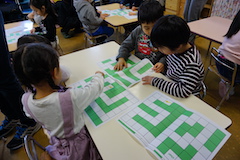 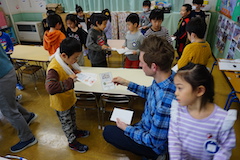 Today was Open English Class day for the Seniors. In the morning, Class 7 invited their parents to watch their English Activity. We received 3 challenges from ‘i-Spy’, the first was a series of mazes. In pairs, the children had to navigate the hungry animals to the food using the commands, “Go forwards __ steps, turn left, turn right” etc. The next challenge was to put the sentences of the story Cinderella into the correct order. In their teams they did excellently reading and ordering the story. The next challenge was to play a card game about Endangered Animals, asking each other, “How endangered is it?” and “How many are left?” before defeating ‘i-Spy’ in a final round of the game. Everyone used lots of English and it was great to show all of the parents how much, how naturally and how enthusiastic the children speak English each day here at IYK. Thank you again to all of the parents that attended today. 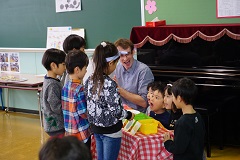 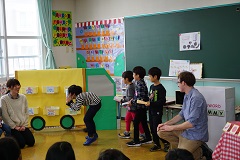 In today’s Open English Class, Class 8 were able to make delicious pizzas using lots of toppings, including broccoli, cheese, and sausage. To do this, they asked each other “Which toppings do you want?” and everyone took it in turns to say “I want __ and __, please.” I was very impressed to hear everyone saying “please”, “here you are”, and “thank you”. Class 8 also put slices of pizza into their pizza boxes and sent them to the nurse, pilot, teacher, fire fighter, farmer, and chef in a special delivery truck. To do so, they used English sentences such as “Where does he/she work?” and answered using the sentence “He/she works in the ___.” Everyone did their best to speak in a big voice. Well done, Class 8! I’d again like to thank all parents who took the time to come today. 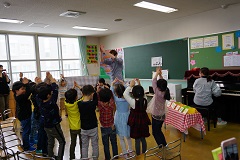 Class 9 worked very hard in today’s Open English Class. They completed a Phonics Challenge in groups to spell three-letter words in English. They wrote words such as ‘cat’, ‘bat’, ‘ten’, ‘pen’, and ‘dog’. They also used their spelling skills to write the secret five-letter password and unlock the fridge. Inside, we found lots of pizza toppings from our friend Giuseppe, including green peppers, mushrooms, and tomatoes. We made yummy pizzas by asking our friends “Which toppings do you want?”, and everyone was able to pick 2 toppings. We then carefully put our pizzas in the oven and, while we waited, we sang the ‘Pizza Song’ in a big voice: “There was a class at IYK, and they love yummy pizza!” We had lots of fun and everyone did such a good job, speaking and singing confidently. Good job, Class 9! Thank you again to all of the parents who took the time to join us today.
2020年02月19日
バックナンバー
↑TOPへ