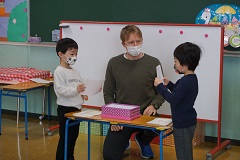 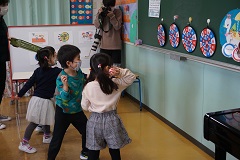 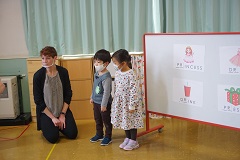 Today was the Intermediate English Open Class. Over the past month Class 4 has really enjoyed learning about food cycles and had fun getting to know the character called the Carrot Seed Boy. Class4 received three challenges from the Carrot Seed Boy. The first challenge was an English Conversation Time challenge. Everyone did a very good job at going through the obstacle course and could ask each other questions very nicely. The second challenge was from the ABC magicians. It was great to see all the children writing letters of the alphabet so confidently and presenting them to their friends. The final challenge was to feed the friends of the Carrot Seed Boy. The children did a very good job at answering a character quiz, identifying the different food groups and putting the right food in the box. Finally, another one of the Carrot Seed Boys friends Enchou Sensei revealed that he had been watching Class 4 all along and he thinks they are nearly ready to go to Class 7. Well done Class 4 everyone did a great job today.

Today Class 5 and 6 got a letter from Ms. Winter inviting the children to play some indoor sports–basketball, ice hockey, and dart ball. The children did very well asking what their friends wanted to try and what they needed, then giving each other tickets for the needed items. After everyone had a ticket, the children were excited to come up and try the games together, and they had a lot of fun playing and supporting friends. The children got another letter from Ms. Winter, promising to play again next week, and then the children moved into a phonics activity. Each child got “PR” or “DR” card, which they placed under pictures of words that began with those letters. They then said the letters, sounds, and words out loud in a big voice. All the children did a great job. Class 5 and 6 are just about ready to level up as seniors! Wonderful work, Class 5 and Class 6!