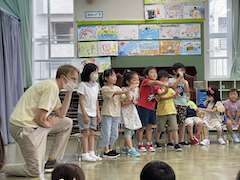 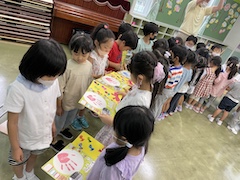 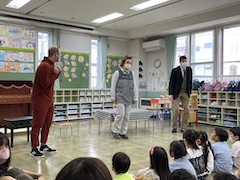 Today was August’s Birthday Party. There were 19 friends that had birthdays in August. Everyone said their name in a nice big voice when asked and could also say their age clearly. Everyone then received their birthday present from their class, presented by one of their classmates. Then it was time for a short play from the teachers. This play was Goldilocks and the Three Bears. Three Bears made porridge for breakfast before going out for a short walk to let their porridge cool down. While the Bears were out Goldilocks snuck into the house and ate the Bear’s porridge before falling asleep. Once the Bears came back they discovered their porridge had been eaten and then found goldilocks. After a short chase, Goldilocks and the Bears became friends and discovered it was also Goldilocks’ birthday today. Mommy Bear then brought a birthday cake out from the oven and Goldilocks and the Three Bears celebrated together.
2022年08月29日
バックナンバー
↑TOPへ