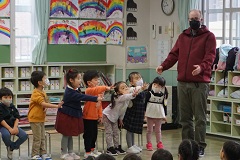 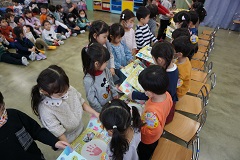 Today was the November Birthday party. It was great to see all the birthday children using a big voice and doing their best today. After the birthday sing was sung and the presents were given, we had a visit from our friend Timothy Pope who was looking in the park. He asked the children if they could help him look for things in the park by using his telescope. At first something that looked like a shark fin appeared, but it was just Timothys’ father. Another fin appeared but it was an ice-cream. Finally, a real fin appeared which was actually a shark. After all, the shark was hungry, and the new friends looked together to find a birthday cake. Once again, a big congratulations to all the November birthday children!
2022年11月29日
バックナンバー
↑TOPへ